Hi Blair,
You can delete the link requesting identification of the "hot pilot." Turns out he was a bombardier and had a very tragic ending. Ed Steinman (my pilot) as noted in the e-mail below from Fred Shay properly identified him last Memorial Day. I had forgotten he was a bombardier. I knew him but just couldn't place him. Joe

----- Original Message -----
From: "Pat & Fred Shay" <pfshay@paonline.com
To: "Connaughton, Joe" <joeconna@traveller.com
Sent: Sunday, May 28, 2000 9:25 AM
Subject: Photo Identification
Hi Joe,
Hope you have a great Memorial Day.  I had a letter from  Ed Steinman who identified the big fellow holding a glass of whiskey.  He  is Michael V. Duslarowitz, a bombardier who joined our squadron November or December 1944.  He was shot down and killed on a mission to  Alessandris - Torreberette, R.R. bridge on December 22, l944.
The crew consisted of Lt. Whalan, pilot, Lt. Eurp, co-pilot, Lt.  Duslarowitz, bombardier, T/Sgt. Huck and T/Sgt. Collyer and T/Sgt.  Gragert.  On the same mission another B-26 caught fire in one engine,  six men bailed out but were never found in the sea.  Those who were lost  were Lt. Miser, Lt. Swinnay, Lt. McCarthy, S/Sgt. Gredson., S/Sgt.  Bangtson and S/Sgt. Nord.
If you remember, Duslarowitz came over as a member of Swinney's crew.  Both were killed on the same day in different airplanes.   Our losses in December were twelve men.  This information came from  Louise Hampton, daughter of C. E. Smith, a gunner in the 440th, who  obtained a secret report somehow.
Ed Steiman sent me a copy and I will mail a copy to you.
fred 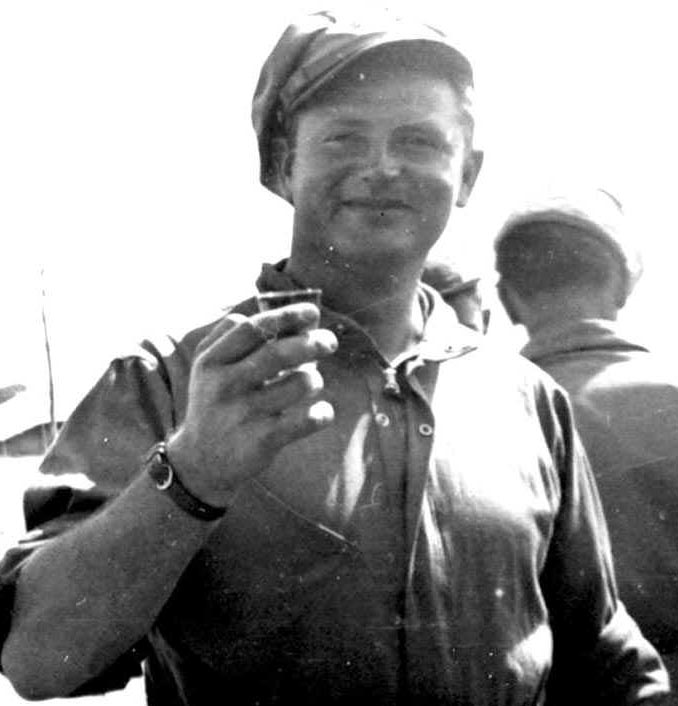